We are a hatchery shipping commercial quality day-old chicks throughout the continental United States and eastern Canada. Since 1946, we’ve been serving family farms and commercial farmers alike from our hatchery in Quakertown, PA.

In 1946, Ernest K. Moyer began construction of his new hatching facility in the middle of a former cornfield in rural Bucks County, Pennsylvania.

He began incubating his first eggs in December of that year and the first hatch of several hundred chicks was delivered during a January snowstorm using the back seat of his 1941 Oldsmobile sedan.

Quality and customer service have been the hallmarks of Moyer’s Chicks ever since this humble beginning. Becoming a member of the National Poultry Improvement Plan, using certified U.S. Pullorum-Typhoid Clean breeding stock, and choosing to hatch year-round, rather than seasonally, set Moyer’s Chicks apart from many of the other local hatcheries. 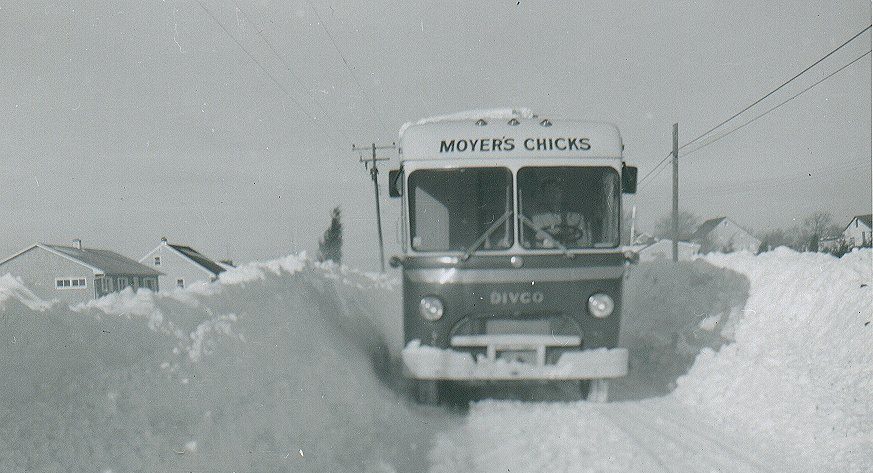 By the Mid 1950s Moyer’s began using custom-designed vans and trucks to deliver baby chicks throughout eastern Pennsylvania and surrounding states. Collaboration also began with several missionaries in Puerto Rico working in agricultural and community development projects there. Weekly trips to Kennedy airport with baby chicks and hatching eggs bound for Puerto Rico became routine. By the early 1960s, a satellite hatchery was set up in central Puerto Rico.

By the 1970s, Moyer’s, began delivering truckloads of chicks to a growing customer base in Ontario and Quebec, Canada as well as supplying large contracted and independent growers in central Pennsylvania. An increasing number of smaller, family flocks throughout the eastern U.S. were also requesting U.S. mail shipments directly to their farms.

In recent years, there has been an increase of customers from the sustainable agriculture movement, providing consumers with poultry products from free-ranging, antibiotic-free, naturally grown flocks. Customers from as far away as California find Moyer’s quality, price, and service to be number one on their list.

If you have ordered from us in the past and have not used our new website yet, you will have to reset your password by clicking "Lost Password" in order to login.

By creating an account with our store, you will be able to move through the checkout process faster, store multiple shipping addresses, view and track your orders in your account and more.

We have a tiny problem.

Just thought you should know.

To verify your email, we've sent an email
verification code to